Here at Darsi, we’ve been enjoying the great outdoors and all the joys spring has to offer: the sun warming the earth and our cheeks; trees and flowers bursting into life; the pure, clear hues of the sky. Everything looks vibrant with the colour volume turned up to delight.

We’re sure it’s no coincidence that many of the Spring Summer 2020 collections featured surges and splashes of intense blues & greens, or an abundance of prints featuring bold blooms – Balenciaga, Erdem, Marni, Fendi & Christopher Kane to name a few.

We’re celebrating two of those eternally satisfying colour combinations here: blue and green, inspired by bluebells flourishing in verdant woods offset with fresh white and soft neutrals or accented with pops of bitter lemon and lavender. Regarding decorative qualities, we’ve been drawn to porcelain, china and glassware abundant with flora and a nod to the exotic.

This joie de vivre for spring, influenced by hints of far flung corners of the world, has been captured to striking effect in our pick of printed fabrics and wallpapers currently on the market.

Pamir Garden Cream / Nettle 216766 & Pamir Garden Teal / Peacock 216765 by Sanderson
The design features an oasis around which animals and birds have gathered to drink amongst bountiful trees. Stylistically the Persian undertones hint at an earthly paradise, “a luminous and perfumed place, populated by a number of angelic and beautiful creatures”. The background has a subtle crackle suggestive of glazed pottery too.

Nizam Cotton Print Spring / Aqua BR-79329.313.0 by Brunschwig & Fils
A stunning interpretation of a style of design called Palampore. This type of cloth, taken from the Hindi word “palangposh” meaning “bedcover”, was made in India for foreign markets in the 17th & 18th centuries and carried to European shores by the East India Company from around 1614 onwards. A palampore design characteristically has a central tree laden with fruits and birds, combined with stylised patterns from English embroideries, Chinese decorative objects and Indian textiles.

Hydrangea Bird Emerald / Blue BW45091-1 & Nympheus BW45083/2 Teal, both by GP & J Baker
These iconic designs were inspired by a fragment of Chinese wallpaper (Hydrangea Bird), and a Chinese hand painted silk panel (Nympheus), reimagined by William Turner in 1917 & 1915 respectively. The first Chinese wallpapers appeared for sale in London in the late 17th Century and heralded the start of an obsession called Chinoiserie, which lasted for more than a century. A Western interpretation of Chinese decorative arts it was applied, amongst other things, to furniture, pottery, textiles and garden design. It was considered essential to have at least one room decorated in ‘Chinoiserie style’, the first of which was designed for trend-setter Louis XIV at Versailles in 1670 -71.

Granadas WP Verde / Azul GDW-5439-005 & Morris Original GDW-4551-001, both by Gaston Y Daniela
A potent pairing showcasing the pomegranate, or “punica granatum” with all its symbolic connotations of fertility, abundance, eternal life, prosperity & beauty. Originally from the Middle East, specifically Iran, the pomegranate has been cultivated all over Asia and the Middle East since ancient times finding its way to Europe via the spice routes. These were in operation from as early as 130 BCE. The word for pomegranate in Spanish is “granada” after which the Andalucian city may have been named, famed as it was for the bountiful fruit. A pomegranate also features on the city’s coat of arms.

Malfa Lagon 04908/02 by Manuel Canovas & Jasmine Indigo W3497.523.0 by Kravet
Featuring a myriad of tonally related hues, these designs celebrate leafy rain forest canopies. As well as the vivid beauty that comes with such natural diversity, rainforests are essential to the health of our planet. It is not surprising, therefore, that for centuries the colour green has been representative of vitality, regeneration, gardens, fertility, growth, harmony and hope the world over.

Ikat Azul GDW5446-002 by Gaston y Daniela.
Ikat, deriving from the word “mengikat” for “to tie” is deep rooted in the textile traditions of Indonesia, India, Japan and Central Asia, especially Uzbekistan. Gaston y Daniela’s Ikat design is based on a 19th Century kaftan from that area. It’s a complex and skill-intensive process of marking, tying and dyeing yarns designated for either the warp or the weft of a loom. In a highly prized, but technically challenging variation called “double ikat”, both warp & weft yarns are patterned. The weaving of the yarns together then reveals rich and intricate patterns with soft, vertically stried edges. Uzbek patterns were often stylised representations of flowers and vegetation, ram’s horns, jewellery or amulets and historically were signifiers of an individual’s social status. 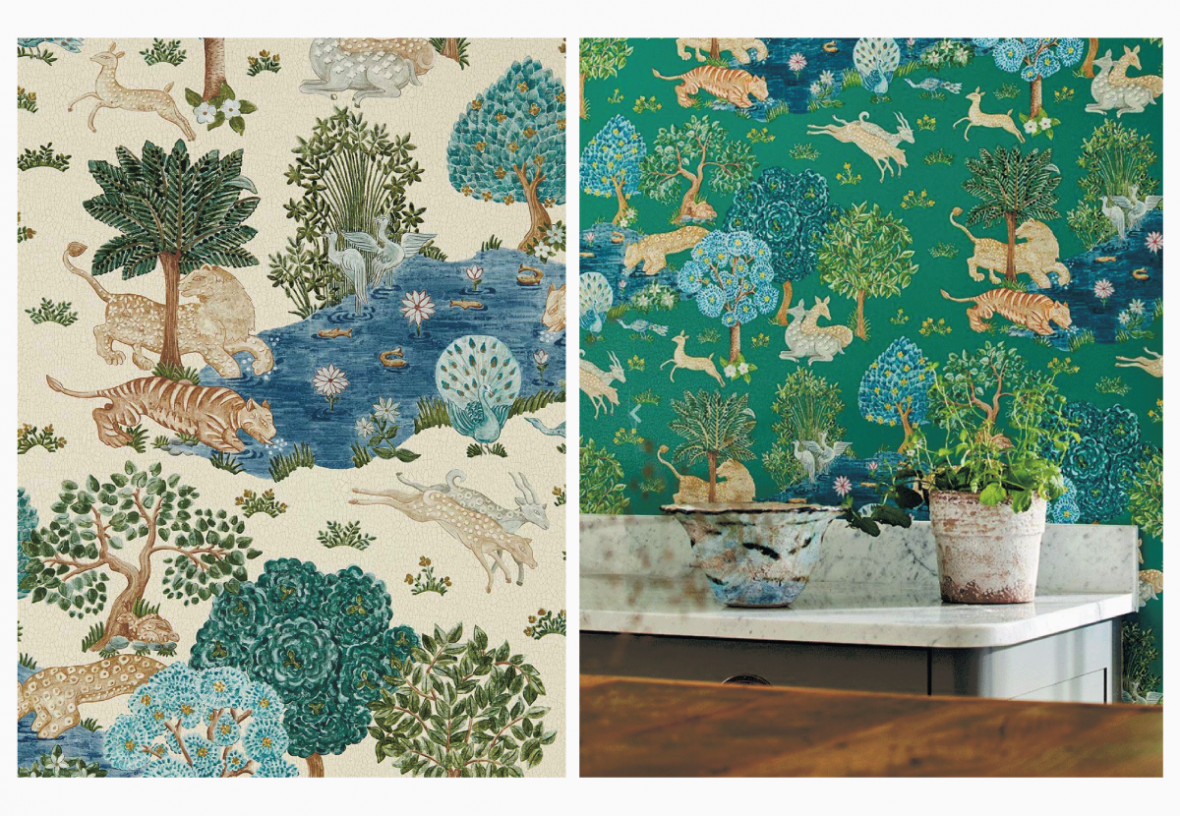 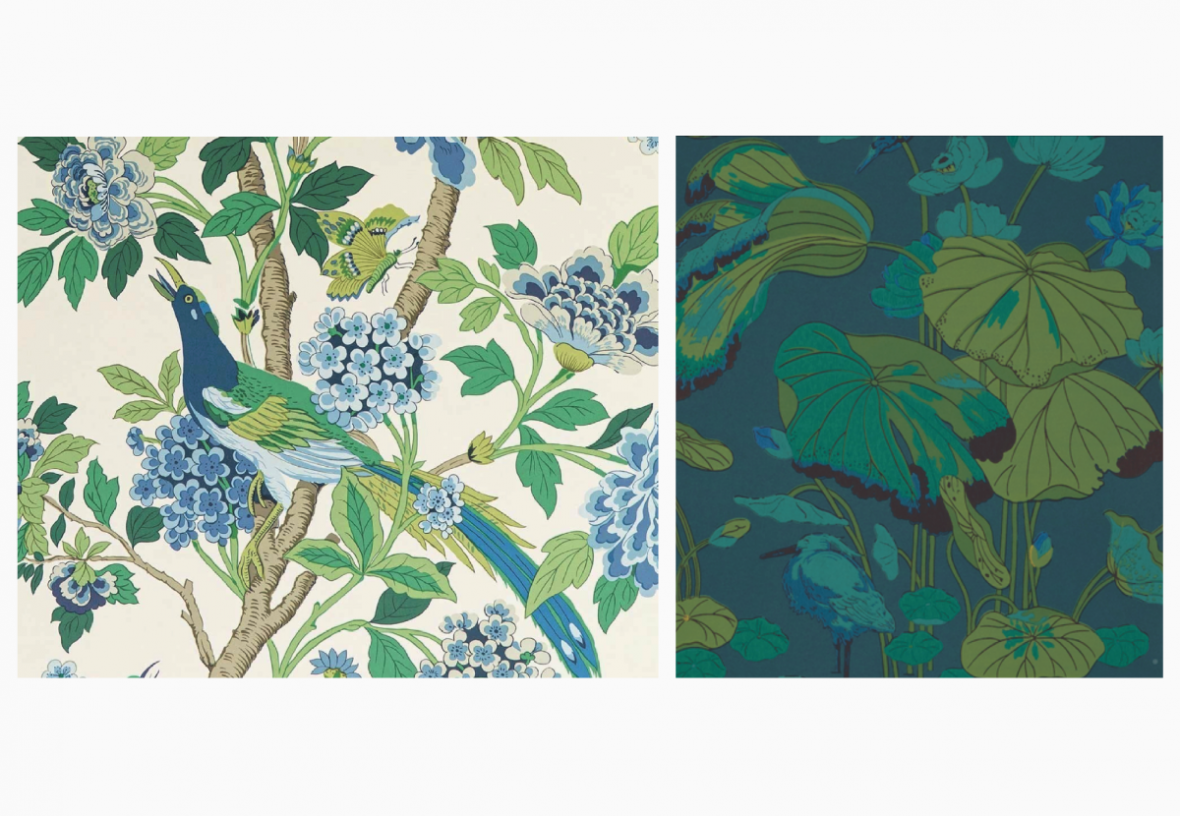 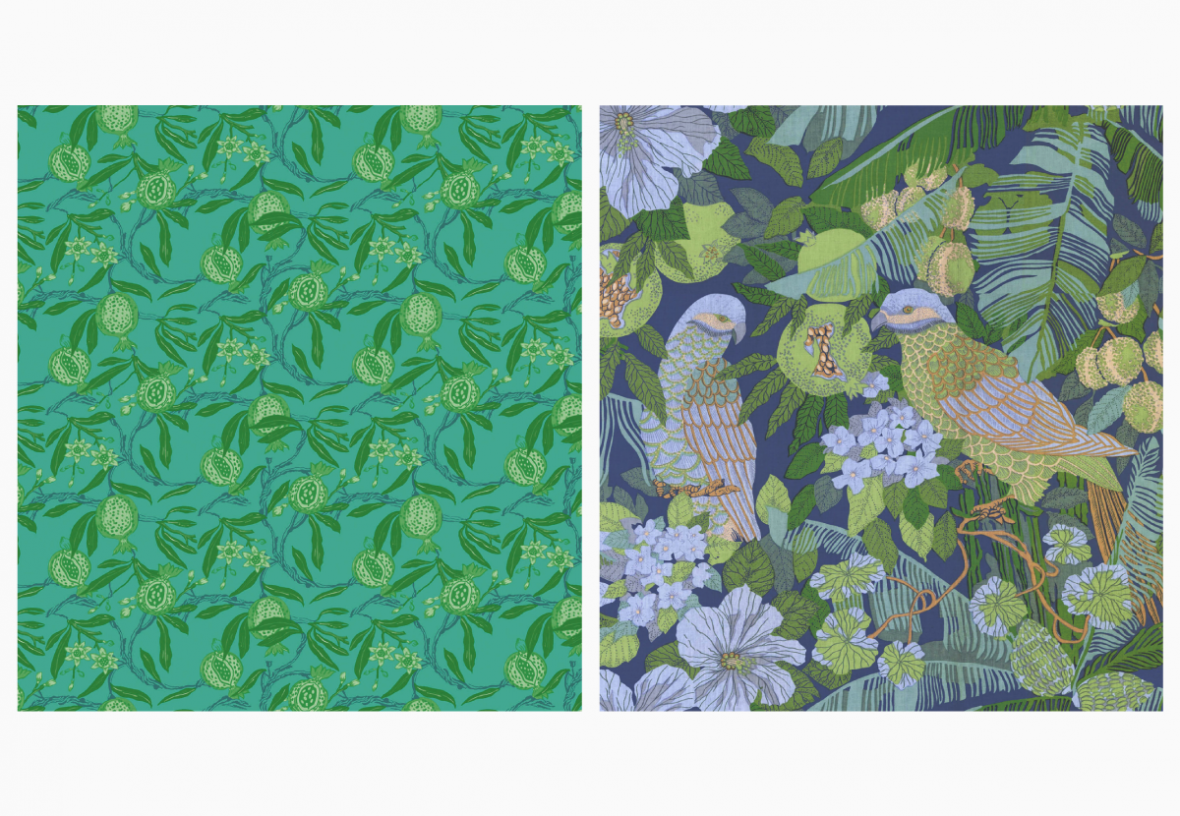 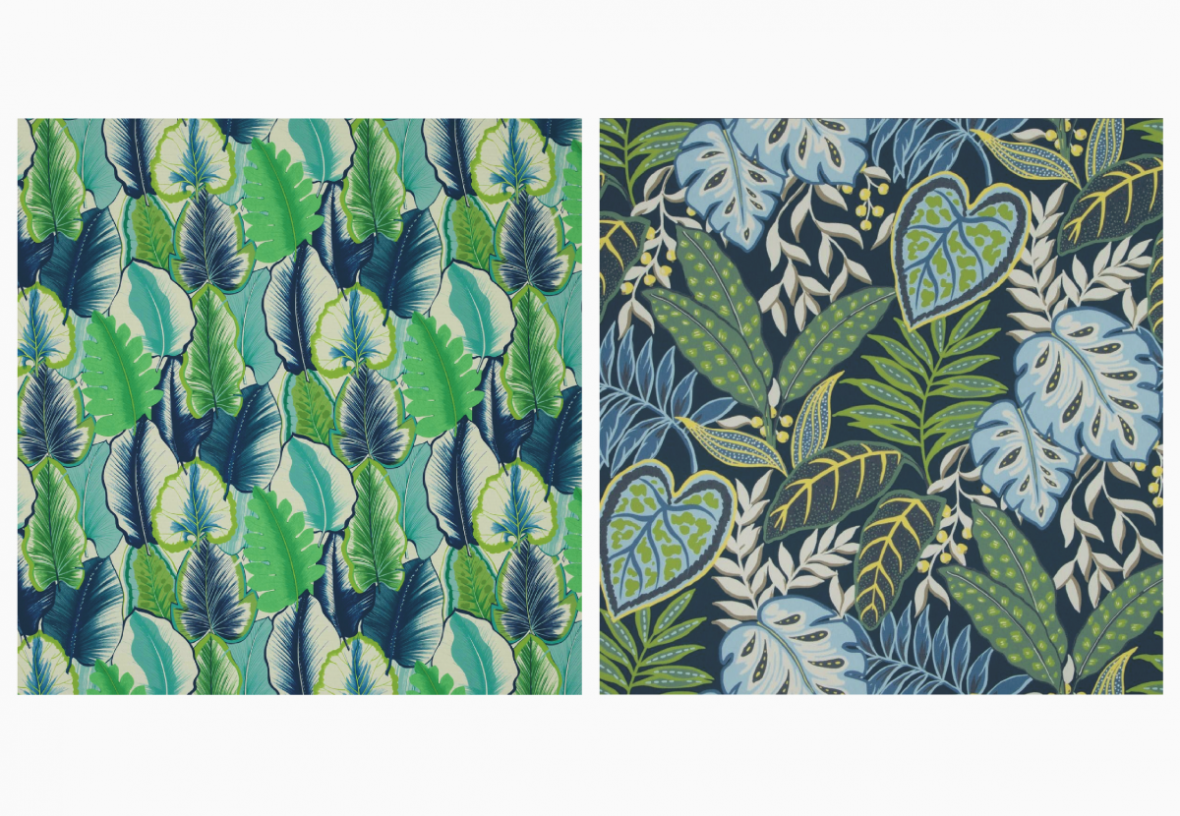 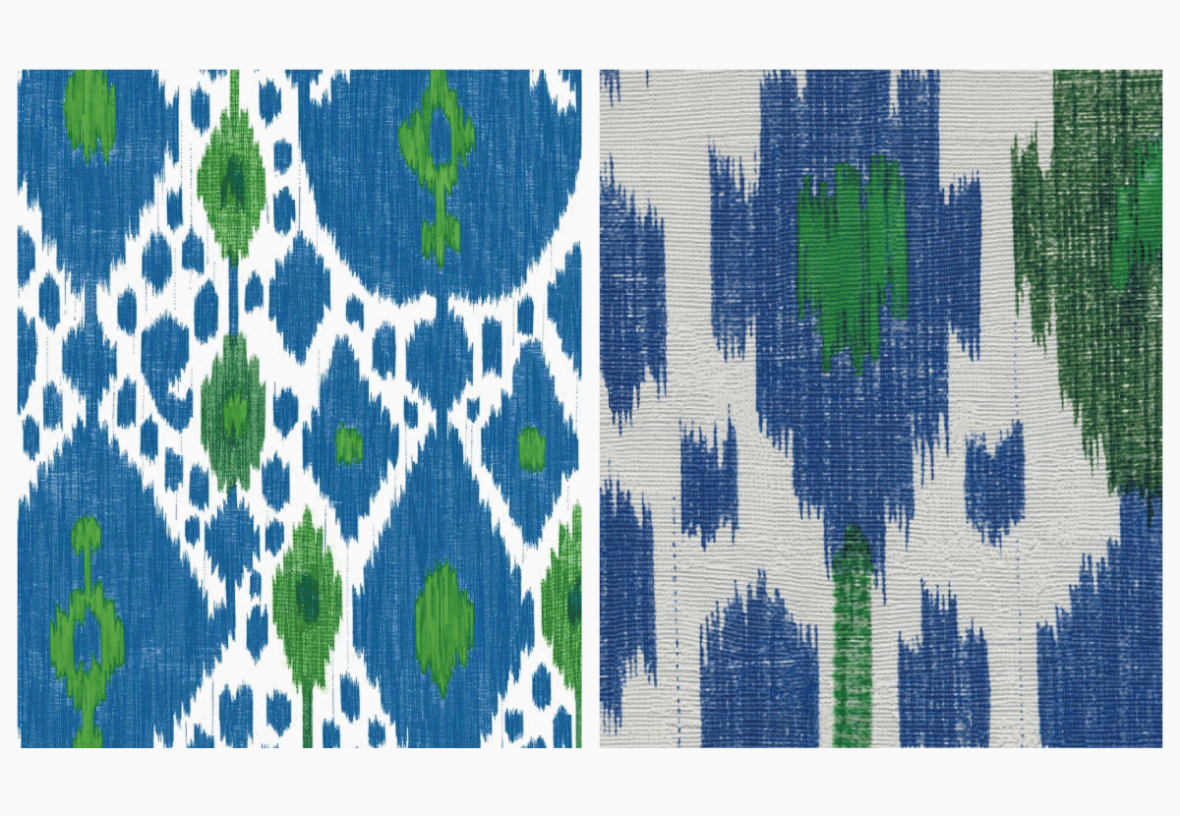 Like what you have seen and feel we could collaborate to produce something amazing?